All the Little Coasts of America (Revision)

New to poetry? Unsure about the quality of your work? Then why not post here to receive some gentle feedback.
Post Reply
17 posts • Page 1 of 1

All the Little Coasts of America (Revision) 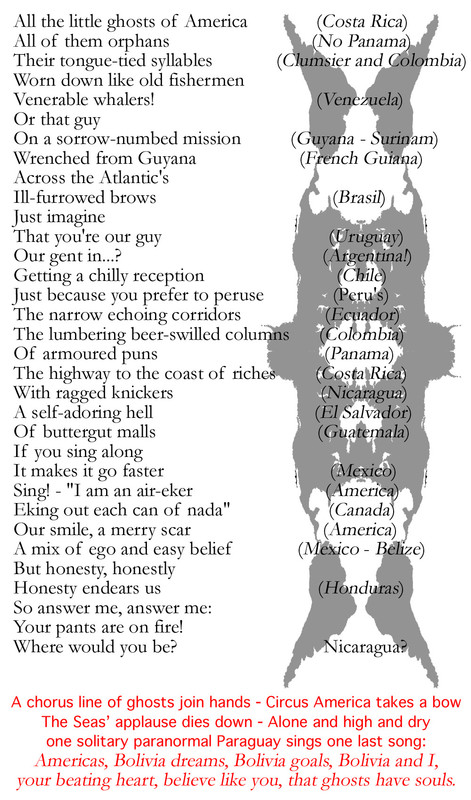 I see this as a kind of found poem: by loosely pronouncing place names, you have woven them into a text. I think I need a few more readings to interpret the meaning of the text. "Little" seems to be a key word in the title.

You've missed out Paraguay. I know you're going to say that's because it's landlocked but I don't Bolivia.
I'm out of faith and in my cups
I contemplate such bitter stuff.
Top

Boom boom! Very funny Ray, I might steal that

Jackie - I think of it as a collision between two found systems, or maybe a poem in a strait jacket.
Jules
Top

Like Jackie I'll need more time with the text but I did enjoy this quirky poem, smiling from the first line to the last.

It's the kind of poem I'd like to find accidently when reading this and that on a plane. It would make my day.

JJ
Long time a child and still a child
Top

You are king of the geography genre Jules. Liked the Nicaragua line best. The Chile line was the worse. A better symmetry if no country names are used in the first part? Why does America get more than one line?

You could offer some history...though I suspect you're wedded to random word plays.

Thank you JJ, Miles and mac
- a word/image revision posted (with added landlockeds)

JJ - delighted with your comment.
This is light verse, a form of nonsense poetry, but I seem to be hooked on it.

mac - thanks for your suggestion, duly taken on board.
This being a circumnavigation, name-checking each sequential stretch of national coastline, some countries appear twice (usually an Atlantic and a Pacific coast) … and in fact I've just realized there should be another America (i.e. Alaska) and of course another Canada. Oh dear

I think I will designate that a deliberate error

Delightful poem! I like the humor in it too, you should publish this!
Top

Like the blot addition. The shorter lines work better. I think you could have 'A gent in' without losing the Greene ref.

The more I read this, the more fun I find.

Hi Jules,
like the ink blot addition, shame it isn't referenced in the piece somehow.

Did you consider, rather than treading the (worn

) coastal path, just go north to south
(or vice versa)? That way you don't have to miss Paraguay or Bolivia.

Why isn't America the USA?

The repetitons (of countries) is ... repetitive.
And I'm not buying the Guyana/Suriname pronounciations. They're not even close.

I though 'pants are on fire' was somehow a nod to 'terra del fuego' but it isn't, is it?

If there was a narrative in these map poems of yours I'd be suggesting 'territorial story telling'
as a collective title.

eking out a living selling maps.

Thanks mac, Poet and Not
- did everyone realise the inkblot image is the Americas mirrored horizontally and vertically?

mac - yes, a better flow with 'a gent in'
If I ever get to make a complete series of these I might call it 'Pages from my Inkblot Atlas'
There's a definite parallel between the visual and verbal processes of groping for meaning.

Poet - glad you like it. The online mag Ink, Sweat and Tears has a quite good word/image section, so I might have a go at sending it there.
Does anyone know of any other print or net publications with a particular interest in word/image hybrids and interplays?

Not - I was hoping you would chip in. Have you been to Guyana?
You correctly corrected my spelling of Suriname. Wiki lists Surinam as an alternative spelling and I don't think the locals mind that much (their airline still lacks the 'e') but it's pretty rare. My source was a very politically correct Peter's Projection atlas printed in 1989 - I wonder what their thinking was?

Thanks for the close reading and particularly the playing out of the North/South system. A lot to chew on there. Descending through a series of 'first past the post' lattitudes is quite an abstract concept but I do like the potential of relating it to lines on the page. My principle defence for walking the coastline is that even the geo-averse can grasp the idea and maybe even make some use of it. It's a very unambiguous narrative line, though I will admit I run into problems with repetition in this most wasp-waisted of continents. Personally I think I've got away with it as it stands - though whether poetic license justifies the alas lack of Alaska and incidentally the missing oppositional toes of Guatamala and Honduras is open to debate.

U.S. of A. vs America - a distinction worth making and maybe in ten years time to elide the two will be unacceptable - and quite possibly already is in official channels. But it's common parlance, everyone knows what it means in context and this piece is nothing if not vernacular.
The title uses 'America' in the sense of the continent, but I think there's also an ambiguity there, with the word 'little' setting up a possible notion of a chorus of little voices in the shadow of one big one. They are addressed as 'Americas' at the end.

Phonemic accuracy - you pick me up on the on/arn of Guyana and the nam/num of Suriname - I think the 'approximations' are part of how this piece works - The N is clutching at frequently ridiculous straws - anything to improvise a route from A to B. 'Venerable Whalers' sets the stall out pretty early. Having said that, the new line break in the revision does put more of a spotlight on the 'On' (harder to drawl it).

Yes, Costa Rica is a bit lazy, but it's low hanging fruit, a sort of way-marker. The energy of invention is directed as much if not more to the smoothness of the journey. Pulling a plum at every stage is not obligatory.

Nada? - I'd be surprised to meet a Canadian who wasn't familiar with this, as anglicized as 'loco' word. Though if I go for the repetition I did like your 'canard-er'.

Glad you liked the coda - wasn't at all sure I could find a way to fit that in.

- did everyone realise the inkblot image is the Americas mirrored horizontally and vertically?
Speaking for everyone, of course!

Though what made the 'horned hemispheres' in the middle? Are they the Aleutian Islands?
The image did seem to suggest there would be more 'psychology' in the poem, rather than (merely, hah!) linguistic play.

Phonemic accuracy - you pick me up on the on/arn of Guyana and the nam/num of Suriname - I think the 'approximations' are
part of how this piece works
Yes, I just thought they were insufficiently approximate

'Venerable Whalers'/Venezuela works, in part, I think because Venezuela in a reasonably familiar word/sound (and three out of
four syllable are the 'same/very close' and occur in sequence'), not so sure about Guyana or Suriname. Personally I'd have found
a Guy in a ... less problematic than a Guy on a ... (though may just be me). Similarly a Sore in name only seems more proximate
than a Sorrow-numbed mission, (but again ...)

Yes, Costa Rica is a bit lazy, but it's low hanging fruit, ... Pulling a plum at every stage is not obligatory.
Phrasing aside (pulling a plum, indeed!) - it's not so much that it's obvious, but when taken in concert with 'Chilly', well, you've
a pair of low hanging plums. And I'm sure there's another word to describe those ...

Nada? - I'd be surprised to meet a Canadian who wasn't familiar with this, as anglicized as 'loco' word.
Me either, with regards to familiarity, but given Canada has both English and French as official languages, not to mention a
plethora of indigenous tongues, to pick a Spanish word, well, there's the whiff of plum about it

A lot to chew on there. Descending through a series of 'first past the post' latitudes is quite an abstract concept but I do like
the potential of relating it to lines on the page.
Fair enough Jules, but I must admit I find the circumlocution of the continent/s equally abstract, particularly as there is no
necessary reason to begin the journey where you do - on the circumference of a circle all points are equal, are they not? -
you could begin anywhere. Your mention of a Peter's Projection atlas reminded me of the history of preferentially weighting
north over south in (Western) map making, which might justify a N/S trip ... possibly.

- did everyone realise the inkblot image is the Americas mirrored horizontally and vertically?


In regards to mags:

I don't know if this is still operating, but you may want a peak anyway:

Thanks for returning Not,
'the horned hemispheres' - the horns, strictly speaking, are the Alaskan Peninsula (which fades into the Aleutians). Vector maps do tend to over-simplify deeply inletted fragmented headlands, but the averaged out shape of Alaska there is essentially a quarter circle.

I think with a heavy mid-atlantic accent and minus the line break 'guy on a' isn't that bad, but I agree with you 'sorrow-numbed' is a poor match. I am thinking about:

mac - the video - very snappy! And the lyrics still pack a punch.
If you turn the sound off and the subtitles on it actually works very well.
I had the thought, West Side Story + Dickens = Mary Poppins!

Thanks for the mag refs - I had a good browse and was oddly underwhelmed - good pics, good poems, but nothing much on the creative hybrid front - or perhaps it was just me.

My Kindle, spookily, has just suggested I might like 'The Penguin Book of Oulipo' - published last year and apparently full of a wide and wonderful range of 'constrained writing'.

thinking about:
If there was a narrative that necessitated 'sea-weary man' I'd be for it, but ... 'that poor, sorry man' ?

As an aside, surely there's a poem to be had in interpreting the inkblot?

- did everyone realise the inkblot image is the Americas mirrored horizontally and vertically?